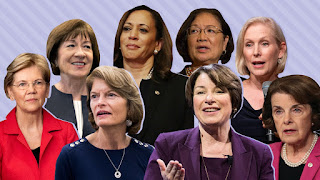 In the last post we looked at how senators have been the running mate of choice for Democratic presidential nominees. Given Biden’s commitment to pick a woman as his VP nominee, women senators have the best shot in veep-stakes. Here is an assessment of the top VP prospects from the current crop of women senators:

1. Kamala Harris- adds racial diversity to the ticket and it might make Biden look like a bigger person for choosing someone who tried to eviscerate him in the debates. California is a deep blue state so her election as VP won’t put her Senate seat at any risk.
Joe Biden owes a great deal to the timely endorsements from black leaders such as Jim Clyburn. Clyburn and the others have expressed a preference for a person of color as the vice presidential nominee and this could tip the scale in her favour.

2. Amy Klobuchar-is a moderate like Biden and her policy positions are in sync with Biden’s. This might allow for a better working relationship. Her mid-west background could help her connect with voters in crucial swing states such as Michigan. Minnesota has a Democrat governor who will appoint her replacement and Democrats should be able to hold on to the seat in the general election. Her endorsement of Joe Biden immediately after dropping out (even before Pete Buttigieg’s endorsement) will further strengthen her case.

3. Elizabeth Warren- could help unify the moderate and progressive factions of the party. Her policy positions could put her at odds with Biden and she would be an easy target for Trump with her past claims of Native American heritage. The other factor that could impact her selection is that Massachusetts has a Republican governor (yes, Massachusetts!) who could nominate a fellow Republican as her replacement. That won’t be much of a problem as elections will have to be held within five months and a Democrat should cruise through but the ghost of Scott Brown looms large. Democrats control the Massachusetts state legislature and could just as easily pass a bill requiring the governor to appoint a Democrat.

4. Catherine Cortez Masto- Biden has struggled with Latino voters and having the first ever Latinx on a presidential tickets could help him with a key demographic in the general election. Nevada has a Democrat governor who will nominate a Democrat and the seat is anyway going to be up for election in 2022.

5. Tammy Duckworth- is a double amputee war veteran and that could hold great appeal to voters. She comes from a deep blue state so there is no risk of losing a Senate seat. However she did have to settle wrongful termination and workplace intimidation lawsuits during her tenure as the Director of Illinois Department of Veteran Affairs.

6. Tammy Baldwin- is the first only gay woman US senator and has managed to win two senate elections in an increasingly red state. She could help deliver Wisconsin which is a swing state but her election could put her senate seat in jeopardy as Wisconsin is a swing state with a Republican lean and there are several serious Republican senate prospect.