THBT sharia courts have no place in islamic democracy. 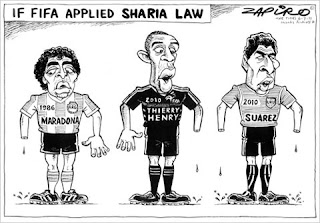 
- Justice systems are a product of the moral philosophies of a society and this is empirically proven by observing the variance in acts deemed to be crimes and the magnitude of punishment thereof from state to state. Societal dipstick is the only bromide.

-Theory of democracy: Religion and democracy are not mutually exclusive ideas and should not be treated that way. A democracy in element enables the collective to by consensus to adopt whatever form of state and governance they deem best suited. Furthermore, even if a society is made up of multiple collectives, each sub sect of society is free to adopt whatsoever form of structure they want their lives to be governed by as long as it does not impinge on the lives of the rest. This is evident in the way different territories within a state have independent laws and different religious communities in India for example follow a non uniform civil code. The believers may subject themselves to the Sharia courts if they perceive it as the only legitimate body of Justice. A monolithic society simplifies the problem further.

-We apply the doctrine of necessity in this situation as it is imminent that in such a construct, both the minorities and the majority must be catered to. In addition it is essential to note that Justice is a very subjective issue and most importantly that perception is a large part of the process of Justice. The populace need to find the Justice system legitimate in order for their to be fear of the law and faith in it. If the islamic population of a democratic nation deem sharia courts as the only valid structure of justice, due to the absolute nature of their religious beliefs, they need to be given that recourse. A justice system which is acceptable to the masses will be more effective and better complied to. Furthermore, the court will be able to fulfill its duties as a societal arbitrator better by virtue of its acceptability.

The people have a major stake in the justice system and it is thus crucial that the justice system cater to them and it does. Thus sharia courts do have a place in democracies as long as the people that are subjected to it ratify it. Those who do not believe in the tenets of the religion will of course be excluded from this. But for those who do believe, sharia is the only valid law that exists and depriving them of that form of justice system will alienate them from the process of justice dispensation.

-In status quo, the victim and defendant in any dispute have limited stake in the redressal system. This is changed if the state enables them to subscribe to sharia courts that may be amiable to both these parties. Conflict resolution and reparation are both processes that will be augmented in this construct. The spiritual nature of justice in the sharia courts have positive implications on these processes and the acceptability of their outcomes.

-Finally, the ambit of cases that the sharia courts will handle; whether or not this will be only for the believers and others such technical issues are not discussed herein as the burden of the opposition is merely to prove that sharia courts have a place in democracy and not to layout what that place should ideally be.